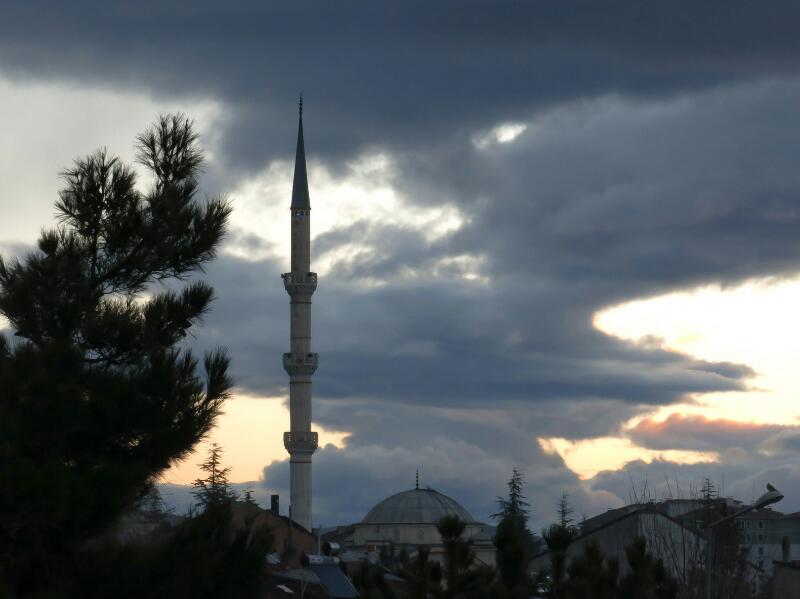 It was cold in Central Anatolia. At night temperatures dropped down to – 20°C and didn’t manage to go above freezing point during the day.

The cold and snow and the lack of trees made the world  look like an unending icy dessert. For days I cycled on the roller coaster road that would take me to Cappadocia from Ankara.  All my concentration focused on avoiding the ice patches littering the hard shoulder were I was riding. I  was doing really well until I lost  concentration after a particularly steep climb.  I slipped over on some ice,  lost control of the bike and came crushing down on the tarmac ending up in the middle of the road which luckily was empty at the time.  It’s amazing how fast  the human brain works when left to it’s own devices. In what felt like a fraction of a second I thought I had to get myself and the bike of the middle of the road, kicked the bike which slid easily on the ice, stood up,  mentally checked myself over and got back on Foxtrot to carry on to my destination.

It wasn’t until I was warm and settled in the hostel that I noticed the pain on my side.  Breathing was painful and coughing,  laughing and sneezing was excruciating.  I must’ve bruised my ribs on the fall.  I gave myself comfort on the fact that ribs heal by themselves. Patience,  arnica to speed the healing,  Ibuprofen and paracetamol to control the pain that’s all I could do in the meantime.

Sleeping at night was hard but cycling in the day was OK,  the cold  being a very effective anaesthetic.  And so, I  continued towards Cappadocia.

Cappadocia, what a magical,  otherworldly place! I had never seen a landscape like that in all my travels.  Extraordinary rock formations scattered all over the countryside,  evidence of cave living everywhere,  ancient churches and monasteries carved in the rocks.

Cappadocia is ancient, people in the Bronze Age already lived here. I love visiting places like this. When I am in ancient sites I feel some sort of connection with the people who lived here. What was life like for them?  How did they keep warm?  What did they feel when they gathered for worship?

I was so enchanted by the place that I wanted to see it from all angles and decided to give myself an early,  extravagant,  birthday present.  The balloon flight at dawn was an unforgettable experience.  The silence,  the sight of the other balloons,  the view of the fairy chimneys from above,  the sun coming out from behind the snowy peaks…

I could have stayed in Cappadocia for months but Central Asia beckoned and in a dreamlike state I left it and cycled towards the Black Sea.

Last time I saw the Black Sea was in Romania,  seeing it again was like meeting an old friend. It was much warmer too and I could feel my muscles begin to relax.  My neck that for days,  turtle like,  had been buried in my shoulders reappeared and I was able to take off some layers of clothing and even stop for leisurely breaks in the middle of the day. Life is so much easier when it is warm and the sun is shining!

Fuelled by the sun and the continued kindness of strangers I slowly continued down the coast to Georgia.

21 thoughts on “Winter cycling in Turkey”