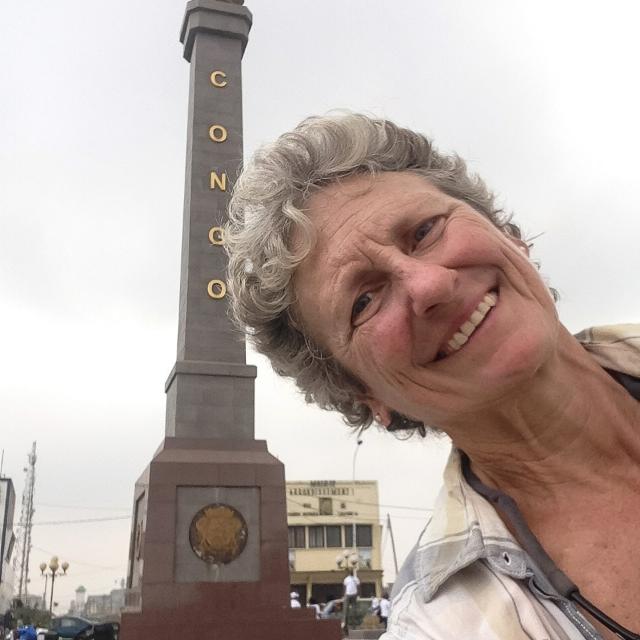 Me – “so where do you get water to drink”

Local  – “we collect it from the river”

I looked at the large flowing river and saw that the women who just a few moments earlier had been washing themselves were now washing their clothes. I had seen many doing the same up stream.

Since arriving in Congo drinking water had been more of an issue than in other countries. I had been hopeful when on arrival I saw water tanks the colour of the national flag in many of the villages as well as water pumps in some. It didn’t take me long to figure out that most of the tanks were empty and some of the pumps didn’t work. And yet there was water everywhere.

There was people everywhere too and it was noisier than Angola and felt much more chaotic. Taxis, big and small, were hooting their horns and so were ice cream sellers on bikes, music was blaring out from shops and bars. Whilst still friendly, people were much more on your face and lacked the gentleness of their Angolan neighbours.

And everywhere too there was Chinese people. I had seen them all over the continent building roads, dams, schools, even police stations but never in the numbers I saw them in Congo. Nearly every other hotel in the capital Pointe Noire, was Chinese and no wonder, about one third of the country’s debt is in Chinese hands.

The Republic of Congo, like all other oil producing nations in the region, went into financial difficulties when the oil prices plunged in 2014 and China stepped in to help. Congo is struggling to keep up with the payments and as it is unusual for China to cut the amount owed or push back payments, one wonders what will be the price to the country.  When Sri Lanka was unable to repay the loan it was forced to turn over a deep-sea port to China for 99 years.

It was at an oil producing village, Bondi, that I spent my first night at a village chief’s compound. It was amazing to observe the level of respect everyone gave the chief. He sat on a special wooden chair and water and a towel was brought for him to wash his hands. I was lucky to witness the resolution of a grievance brought to the chief by a pregnant woman and a man that I assumed to be her husband. After listening to both parties, the chief spoke. As she walked away, I got the impression that the woman wasn’t happy with the outcome but she didn’t challenge the chief.

Village chiefs and Catholic Missions provided safe places for me to stay the night. The places run by nuns were particularly nice, well looked after and spotlessly clean.The community of the Sisters of Saint Paul de Chartres in Mvoundi was no different. The nuns welcomed me with open arms, gave me a safe place to spend the night where I could have a shower, invited me to eat with them and before I left filled my bottles with boiled and filtered water. I could’ve spent hours talking to Sister Maria Luisa who had lived most of her life in France and Rome but it was time to tackle “the mountain”

People had been telling me about “the mountain” since I’d left Pointe Noire and I didn’t know what to expect. It wasn’t particularly hot but it was very humid and for the 10 km of climb sweat was pouring out of me. My surroundings were extraordinary, I was riding in the middle of the African rainforest.

The sun didn’t shine in the rainforest. Every day I was surrounded by the heavy white light of the sun trying to get through the cloud of humidity clinging to trees and climbers and the lack of sun weighed heavy in my spirit. It made villages and roadside stalls look dreary and small towns appeared in my eyes even shabbier than they were.

There is no two ways about it, Central and Southern African cities are ugly and always dirty and Congolese ones were no exception but at least in Dolisie there was a market. I had come upon it searching for a bank with a working ATM. The simplest of jobs here require time and patience. In this instance, I had visited several dispensers before someone directed me to the Central Market where I walked to passing interesting restaurants and hundreds of barbers and hairdressing shops.

The market was a far reach from those I had seen in Egypt, Iran or even Tajikistan but its essence was the same – noise, smells, people… In the market I managed to get cash and the provisions I needed to get me back on the road.

In Congo only about 3000 out of approximately 23,500 km of road are paved and from the rest of my stay in the country I would be riding on gravel roads.

Although I was on the main road between Congo and Gabon, it felt very remote.There was forest all around me, a bright emerald green snake over 1.5 mt long crossed the road in front of me to get lost in the vegetation, I crossed hundreds of small streams and the red dust of the road stuck to my sweaty skin. As they passed me, lorries carrying huge trees showered me with dust that went everywhere no matter how much I tried to protect myself from it.

The mixture of sweat, dust, heat and humidity rot my shirt which was falling apart and I finished each day desperate for a wash. Above food or drink I wanted to have a wash. There were no showers in the places where I spent the night but I always managed to get a bucket of water to wash. On one occasion, I accepted water to wash from a village chief. I knew that they had to walk 2 km to get water and yet, I selfishly used some to wash in a concrete outbuilding with green algae and black mould covering every surface.

Washing at the end of the day became an obsession. I arrived at the border and a treat was waiting for me: no dirty outbuildings this time, I was directed to the river to wash and collect water. I didn’t hesitate for even one second, with my soap and with a wrapper around me I had the most luxurious of baths surrounded by forest.