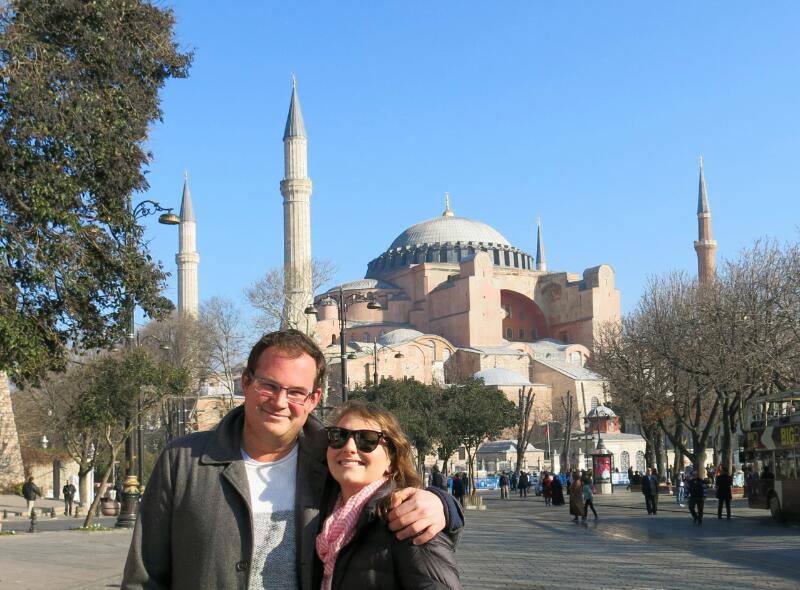 I have been in Turkey for nearly one month now.  My lovely daughter Amaya and her boyfriend John joined me in Istanbul for New Year.  It was a real treat! It was good to catch up properly and be an off-the-bike tourist for a  few days.  We treated ourselves to nice food,  sightseeing and on New Years day a visit to a posh hamam (Turkish Bath). Saying goodbye was very sad, even more so because it could be a long time before we see each other again. I miss my girls!

Foxtrot also had some treats. She visited the best bike hamam in Istanbul: Bisiklet Gezgini where she was lovingly pampered for two days.   She’s  now sporting a Son 28 dynamo and an Edelux II headlight.  No more worrying about lack of power for my gadgets or being petrified in tunnels.

And then it was back to being on the road again.  Every time I stop cycling for any length of time it’s a bit of a struggle to get back on the wheels.  My muscles seem to forget what is like to cycle for a whole day, the bike feels really heavy and I feel really unfit.  Luckily it’s no long before I get back into the swing of things.

Snow and low temperatures have followed me since arriving in Anatolia. Yesterday was a really hard  day.  A lot of climbing and strong cross wind,  heavy snow and rough road surface.  I was really chafed with myself when I arrived at my destination but my joy didn’t last long,  when I enquired for a place to stay I was told that there was nothing at all in town.  The nearest place with accomodation,  Nevşehir,  was 26 km away and there was no way I could make it.  I had come off my bike once already on the icy road and in the dark in the middle of a snow storm it would have been too cold and unsafe to continue.

The young man I’d enquired about accommodation took me to a café full of men,  not a single woman in sight and sat me by a roaring fire.  A big debate amongst the men followed.  Before I realised they had all chipped in to pay a taxi to take me and Foxtrot to Nevşehir.  I found it hard to hold back  tears I was so moved.  This generosity is not an isolated incident.

A few days ago,  I  was snailing up a mountain road.  I knew there would not be no towns were to find accommodation for the night.  It was getting late and the sky threatened snow.  I was looking for somewhere discreet to pitch my tent for the night when a car stopped.  A young man came out an asked me whether I was OK. After a short exchange he invited me to stay in his farm for the night in a nearby village called Dedeler.

The village was 16km away. The knowledge that I had somewhere warm to sleep gave me renewed energy. I pushed up hill but soon  began to doubt that I could make it.  Then, a tractor stopped and the driver on hearing I was going to Dedeler insisted on giving me a lift.  With Foxtrot installed in the back we continued uphill.  It began to snow really heavily and night fell.  I was lucky,  on my own I would have never made it to the village.

The tractor came to a stop in a dark farmyard. It was muddy and damp.  By now I was very cold.  I couldn’t feel my hands or feet and was shaking uncontrollably.  Ahmed,  the tractor’s driver,  invited me to go inside his house after calling my host who agreed to collect me from his farm.

I took off my shoes to go inside and Ahmed opened the door.  I walked in a small brightly lit room,  whitewashed walls and carpets covered the floors.  A wood burning stove was the centre piece in the room and its warmth filled the space.  It was heaven after the cold and the snow.

An older woman was sitting in a low couch.  She had the  gentlest of  faces and the brightest of blue eyes. Her whole persona exuded warmth and friendliness.  By signs she asked me to sit next to her and take off my damp socks.  What followed was wonderful,  it was the purest form of human comunication,  looks,  touch,  smiles,  intonation.  My words came out in English and Spanish hers in Turkish and yet I know that we absolutely understood each other.

Before long,  a younger woman breezed in from the adjacent room.  Like the older woman she was dressed in traditional Turkish clothes,  wide pantaloons of lovely checkered material and head scarf.  She gave me an open hug,  a big smile lit up her face and by signs told me that food was coming.

In no time a low table was brought in and food appeared. At the same time Feridun,  my host,  came in.  Greetings were exchanged and we sat on the floor to eat.  Different plates of food were placed on the table.  Somehow my plate was always full.  Then it was endless cups of çay,  the tea I’ve come to love.

Finally it was time to say goodbye and walk to Feridun’s farm. Dedeler is very small,  500 inhabitants and Feridun knew everyone. It took a while to cover the 200 mt that separated the two farms,  the walk punctuated by greetings and conversations.

Once in his farm we talked about his dreams and aspirations. He shared with me photos and stories of other travellers he has welcomed in his house and the postcards they have sent him, little treasures he keeps in a box.

Soon young men from the village started to arrive, amongst them was the Mukthar,  the head of the village.  Mukthar means chosen.  In spite of his youth the village had voted him as their leader. People go to him for arbitration and advice. Before the evening was over I had received an invitation for breakfast at the mukthar’s house.

Fresh snow welcomed the day.  By the time we arrived at the mukhtar’s home the table was laid full of delicious home made bread,  yougurt,  cheese, chips,  chicken,  eggs cooked in spinach,  honeycomb,  jams. My second feast on less than 12 hours!

There were no cars on the road.  I relished the silence and I thought about the people who have opened the doors of their houses for me,  a total stranger.  I also thought about the dozens of people who have showed kindness to me in a miriad of ways,  giving me fruit,  calling a brother in Spain to act as an interpreter,  inviting me to their home for tea or coffee, contacting friends to promote my trip,  sending me messages to check I’m OK, hooting their horns,  smiling and waiving as I pass by…

It is the messages from all of you,  the wonders of technology that allow me to be in contact with my closest ones and the kindness of strangers that keep me smiling whilst pedalling.

25 thoughts on “The Kindness of Strangers”