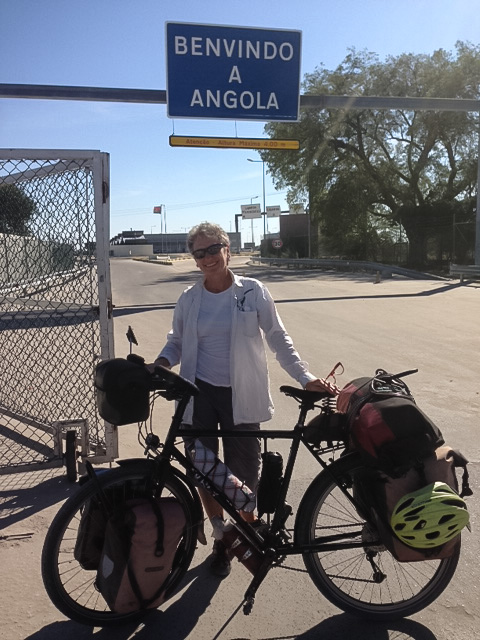 Do you believe in love at first sight? I do, because I have experienced it but if I had any doubts they would have been dispelled the moment I crossed into Angola.

I was nervous, I aways am when entering a new country but this time it had added dimensions – I was entering West Africa and a less beaten track for cyclists than the Cairo to Cape Town East African route. Other travellers talked about how much more difficult it was to travel the West Coast and although I had already been in Africa for 14 months I couldn’t stop my nerves.

The unknown versus the familiar, that is what is all about. The unknown equals fear and apprehension however, as soon as I crossed the border into Angola what I encountered was familiarity and with it I instantly relaxed. Portugal, the old colonial power, had left behind a language that I could understand and communicate with relatively well and foodstuffs that you find in Spanish shops: chorizo, membrillo (quinze jelly), bacalao (dry salt cod) and what I call proper bread which in England call French sticks, it couldn’t get any better.

As I cycled along the South of Angola, evidence of the 25 years war the country suffered after independence was everywhere. A war that is still very much in people’s minds. The owner of one guesthouse told me about the soldiers driving down the road in front of us, the sound of the bombs as they dropped and the day she was given the news of the death of her husband. She had to raise her children on her own as a seamstress until she was able to open the humble establishment where I was staying. She kept on repeating that peace is precious and how she wakes up every morning thankful for yet another peaceful day. I was humbled by her strength.

My landlady’s son, like hundreds of other Angolans, was educated in Cuba. Angola still remembers the help received by this country during and after the war with memorials and paintings.

The war is still present not only in Angolan minds. I was moved to receive an unexpected message from one of my South African followers that read:

“36 years ago (December 1983) I crossed that border into Angola as a terrified 19 year old going to fight an illegitimate war against an “enemy” that I didn’t know. I hope one day to cross that border again under different circumstances. If you go through Cahama please pray a blessing over it for me. You are a very courageous lady”

I happened to spend the night in Cahama in A Catholic Mission run by some Mexican priests with whom I spent a wonderful morning. Alejandro, one of the priests, took me to a neighbourhood where a rusting tank sat next to a group of newly built houses and there he said the blessing. Be stood there, silent for a while and my heart ached for that frightened 19 year old.

Catholic Missions became the places I sought to spend the night and they always received me with open arms. In one such mission, I woke up to the sound of singing, the sun was rising behind the papaya trees and the palm trees. The ceremony finished as I was drinking my coffee and the girls living at the nunnery were gathering wood to cook their breakfast. I too began to prepare mine but the difference couldn’t be more stark, whilst I was having a nutritious meal of eggs, cereals and an orange they were stirring with a stick the maiz meal which constituted their diet. My privilege forever present.

Staying at the Missions and talking to the men and women living there I learnt about the terrible drought in the area. On the bike, I had seen shepperds walking North with their herds, gourds with water and cloth bundles with their meagre posesions hanging of the sticks on their shoulders. What I didn’t know was the escale of the migration until I heard on the news that people with tens of thousands of animals were on the move in the search of water and food. Compared to Namibia, Angola seemed very green and I thought that there was a lot of water but maybe this was just an ilusion.

What was not an ilusion were the hundreds of baobabs I saw in the country. How I love baobabs!! I love everything about them and every now and again I had to stop to tell them in a loud voice “you are beautiful”. For the first time I saw the fruit of the baobab being sold by the side of the road, the locals call it mucua and make drinks and ice cream with it.

Neiher was an ilusion the gentleness of everyone I meet on the road and the warmth of their smiles. Without fail, they responded to my greetings and called me amiga. I was totally captivated by Angola.

And like someone in love, I delighted in what had become familiar about Angola – the baobabs, the greetings of the people I met, the daily purchase of bread and also in the new discoveries  – the trip to Tundavala with new friends, the semba dance class I went to with my Benguela landlady, the days by the sea, the extraordinary landscapes, the encounters with other travellers, the stories I heard from expats like Allan and Julia founders of the Development Workshop who have lived here for a long time and care about the country.

And like someone in love I had moments of dissatisfaction too. The crossing of the mouth of the Congo river to reach the province of Cabinda was challenging as it ended up with me having to be separated from my trusty bike but once in Cabinda, when a little boy came running excitedly to my tent to show me his puppy love was all I felt.

35 thoughts on “Falling in love – Angola on a bike”