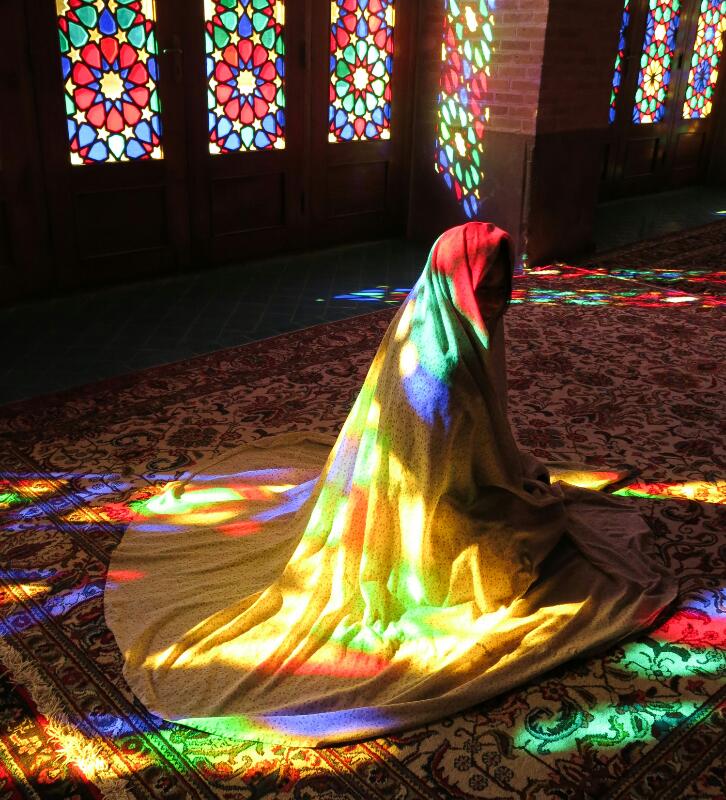 Iran, a land that conjures up images of Arabian Nights (las Mil y una Noches), deserts, blue tiled mosques, narrow alleys, ancient history, Silk Road caravans and also images of war,  mullahs, death penalty, compulsory use of the hijab, women as second class citizens, censorship…I have been here for over a month and a half and have fallen in love with the place.

When I crossed the border from Armenia into Iran the landscape changed instantly.  From the dramatic mountains, I entered a desert where fruit trees flowered in a thin strip of cultivated land. I mused about how much man can change a landscape, here was a piece of desert transformed into an orchard.

I thought I had left the cold behind but some unseasonable storms brought in a lot of snow and an enforced stop. It was a lucky stop as I met Jai Lun, a young man from Taiwan with whom I cycled for a few days. It was pretty wonderful to have company, someone to share food with, someone to decide where to pitch the tents at the end of the day and talk about the events on the road, the villages we had been to and the people we had met, and someone with whom to plan the next day. It gave me a glimpse of what must be like to cycle in company and I was sad to part ways with him.

It was an interesting experience being with a man in Iran though as I observed how suddenly I became invisible and people addressed themselves to him and not me.

Tabriz was the first big city I visited. The town was busy getting ready for Nowruz, the Iranian New Year. The bazaar, one of the most important commercial centres of the  Silk Road was teeming with people busy buying gifts for friends and family. It was the first time that I saw large numbers of women wrapped up in chadors, the black cloaks some Iranian women wear in public. Chadors dont have any buttons so women need to hold them with their hands and a lot of them put a corner in their mouths to stop them from falling off. Looking at them I thought about how restricted their movement must be,  constantly having to worry about them staying in place. I must say that it wasn’t a sight I relished.

Iranians roads were busy with families travelling  the width and length of the country visiting elders and other relatives as part of the Nowruz celebrations. When drivers got tired they just erected tents by the side of the road and in city parks (it is legal to camp in public parks in Iran), shoes in neat rows outside the tents.  Groups of people were having picnics everywhere. Seeing so many people camping out made me feel instantly safe.

Iran is full of wonders: Magic bazaars, Zanjan with its wonderful brick work, Shiraz a real maze with caravansarais, mosques and bath houses within it. The blue Soltaniyeh dome, one of the largest brick domes in the world, standing 49 mts tall. The beautiful city of Isfahan that captivated me with its beautiful mosques covered in ceramic tiles, its monumental bridges over the river, its decorated Armenian church and its palaces and gardens. And special Shiraz with shrines of saints and mausoleums of poets.

It has been wonderful being in this country, eating in small roadside cafes and spending time with people. People from all walks of life have open the door of their homes  to me.  A young photographer and a older Armenian couple in Tehran,  a carpet weaver  in  Gishi,  a shopkeeper/marathon runner in Marand, a mountaineer in Hasthguerd, an environmental activist in Qazvin, an artist in Zanjan, cyclists in Isfahan, a Zoroastrian couple in Yasd…To many to mention them all here although I carry each of them in my heart.

And each time I felt  utterly privileged to sit with them on the carpet around a spread of delicious food: yoghurt, breads, fruits, nuts,  pastries,  salad,  yoghurt drink and of course gorme sabzi,  a delicious home made lamb stew.

And in the morning,  after sleeping on the same carpet,  I  enjoyed flat bread covered in sesame seeds with cream and honey whilst having conversations about hopes for the future of Iran and of their children before saying goodbye with warm embraces. 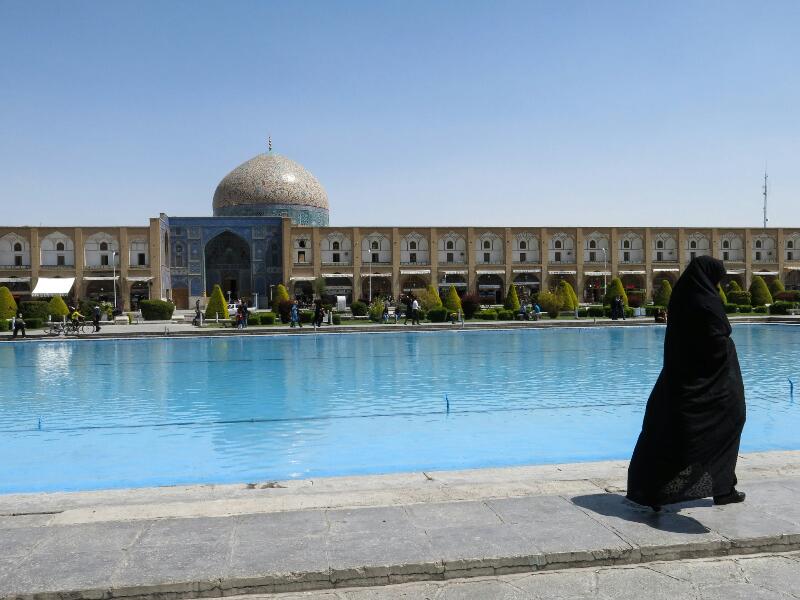 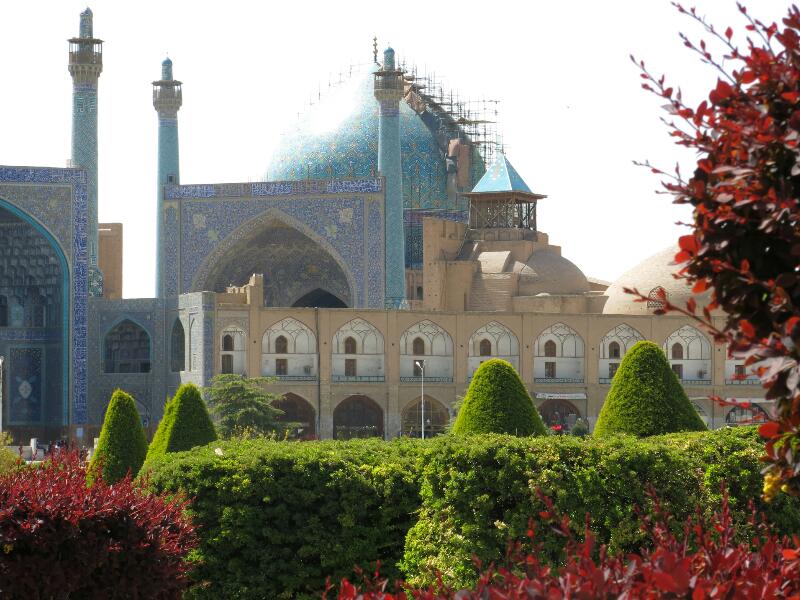 The ride across the desert between Isfahan and Yasd was memorable. It was after I left the carpet weaver in Gishi that I reached the small town of Varzaneh, an agricultural oasis in the middle of the desert. The need of fertiliser for the crops gave rise to the building of dove houses where thousands and thousands of pigeons lived, their droppings a precious source of food for the arid ground.

From Varnazeh I reached the desert dunes, some of the highest of Iran where I camped for the night. After pushing the bike in the sand for what felt like hours, I chose a spot surrounded by high dunes. As I was setting camp a strong wind made it really difficult to pitch the tent but I eventually succeeded. Then as it by magic, the wind stop and the desert was silent and peaceful in the sunset. I climbed a nearby dune, the sand hot underfoot. A beautiful sight welcomed me: sand dunes as far as I could see, glowing golden in the evening light. Sitting up there, alone in the middle of the quiet desert I lost track of time and it was only when night fell and I felt a shiver that I made my way back to the tent and into my sleeping bag.

In the middle of the night, I felt the tent shake and heard a mighty noise around me and what seemed to be rain hitting the tent. I was glad that I had secured it with some heavy rocks. As I lay awake in the tent I realised that I was in the middle of a sandstorm. I thought of my bike getting sand everywhere and the harm that that would do to it, but there was nothing I could do about it, I just had to sit tight and wait for it to pass. Eventually it did and the desert felt silent again.

I got up before sunrise, the desert was beautiful without a drop of wind. My footprints from the day before had disappeared and had been replaced by perfect ripples in the sand. Sand had got everywhere in my bike and I spent hours cleaning it to avoid damage to its components.

I left the dunes to cycle across more desert in search of the abandoned caravanserai  were I was hoping to spend the night. For hours I cycled in an unpaved road with nothing but desert either side of me. As I was going along I was thinking about all those caravans that centuries before me had been on this very track, how they would look at hills and mountains as reference points to help them find the refuge of the caravanserai and how as a modern traveller I was also seeking its refuge. I went pass a hill in the middle of the desert, incongruous in this flat land, the space around it littered with black rocks from its decomposing slopes. It was hot and I cycled for hours with nothing but desert around me.  Every now and again I saw camels wondering around.

Around 4 o’clock a strong wind started making it impossible for me to cycle. I walked for a couple of hours but at one point I knew I couldn’t carry on, I was knackered. After a while I found a spot by the side of the road with some piles of gravel and decided to camp there as the gravel would afford some protection against the fierce wind. It was then that I saw a cloud of dust in the horizon, a truck, the first one for hours, was approaching. There and then I decided to hitch a lift to the caravansarai. The truck stopped and the drivers helped me to pile everything inside the cabin. It took me quite a few attempts to convince them that I would be OK in the caravansarai as they were really concerned about my safety. Finally they agreed to take me there. The first sight of it in the light of the evening was of pure happiness, the same one travellers for centuries before me must have felt: I had arrived at Khargushi Caravansarai!

The caravansarai had everything I needed, water in a well in the centre of its courtyard and a maze of rooms all around it. In my mind I could hear the noise and bustle of the place full of camels, donkeys, people, goods…

I settled to sleep after admiring the stars that littered the night sky. I had just drifted to sleep when a car entered the precinct, I heard the noise of their doors closing and some men shouting something I couldn’t understand. I laid very still in my sleeping bag and after a while, when it was clear that they weren’t going, I decided to face the newcomers without really knowing what I would be facing. The light of a torch blinded me and a man crouched by the tent, got a paper out of this pocket and read from it in English. It was then that I saw another man and recognised him as one of the truck drivers. They had  brought me water, bread and cheese and wanted me to go with them to a nearby mine where they offered me a place to sleep. I managed to persuade them that I was OK and finally they went and left me to enjoy the silence and loneliness of my refuge.

In the morning I explored the nooks and crannies of the place. It must have been a magnificent castle in its heyday.

Eventually I left Khargushi and continued cycling in the desert for two more days before I reached Yazd, a city with more than 5000 years of history that was once visited by Marco Polo.

The architecture of the town is really interesting and different from that of other cities in Iran. Yazd has the largest networks of qanats in the world, and to deal with the heat many old buildings in Yaz have windcatchers, and large underground areas.

Zoroastrianism is strong in Yazd.  The city has a Tower of Silence , and a Fire Temple which holds a fire that has been kept alight continuously since 470 AD.

And from Yazd it was Shiraz, the city of the poets and of course Persepolis. Words fail me to describe the beauty of the place, I hope the photos convey some of it! 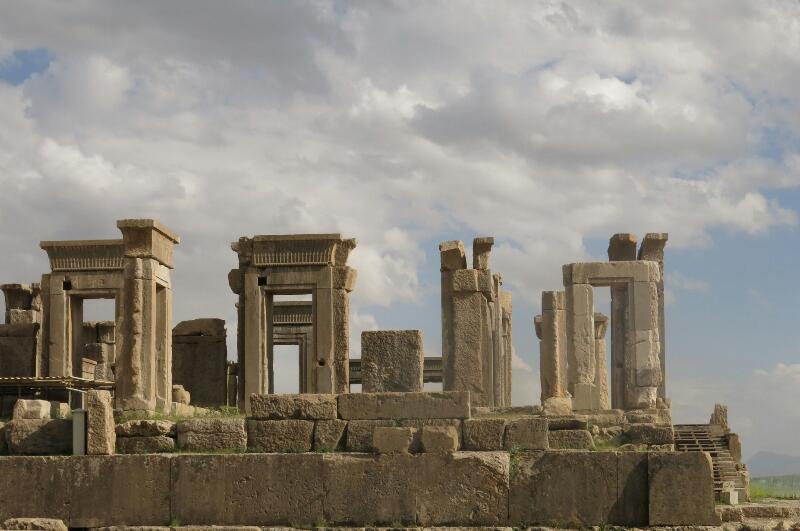 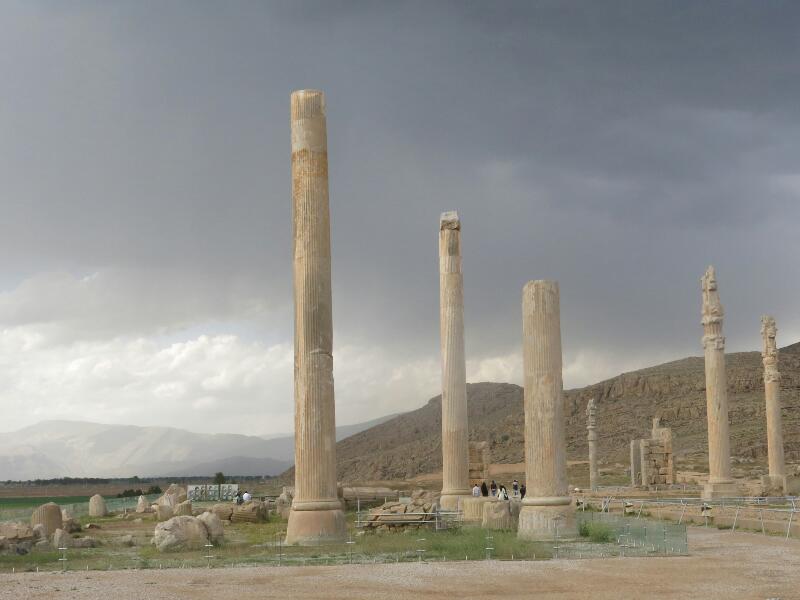 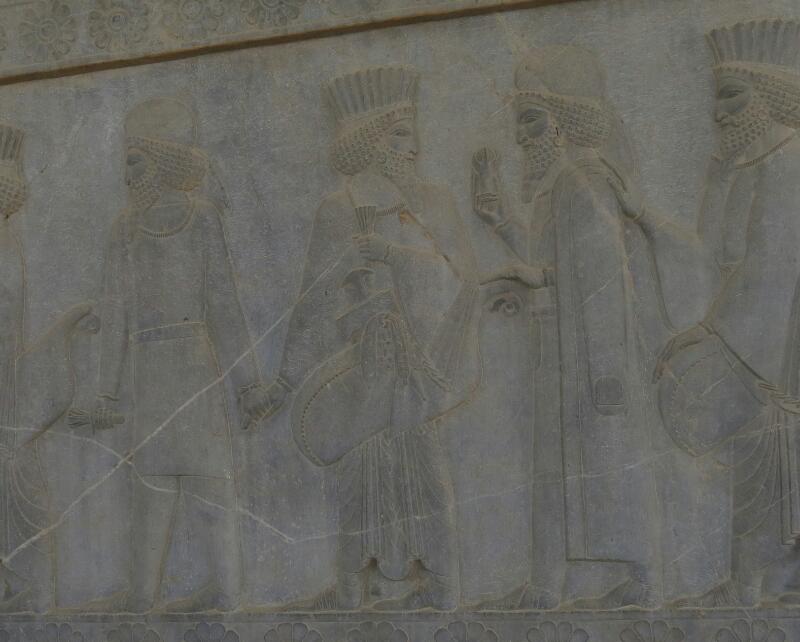 Now back in Tehran I am trying to nurse my knees back to health. Priorities in my nomadic life are down to the real basics: what will I eat today? where will I sleep? will it rain? will it be cold/warm? So much of my day is spent seeking physical comfort. Health is obviously a big one.  I listen to the niggles of my body and worry when all is not as it should. Right now, I’m obsessing about my knee. Overall, I am feeling well and strong and it would be tragic if all had to stop because I haven’t been disciplined enough to stretched at the end of each day. I know I am my own worse enemy sometimes, I know it only takes 10 minutes to do the exercises but do I do them? Now I have started in earnest and I really hope I haven’t left it too late for the knee to sort itself out because Central Asia awaits.

21 thoughts on “The magic of Iran”