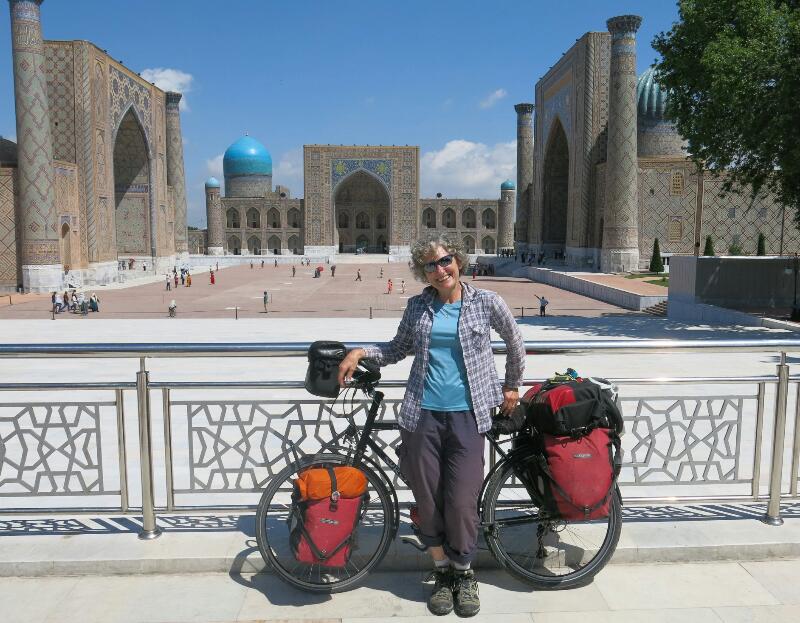 Turkmenistan visas are notoriously difficult and right now refusals are common. The worst thing is that they don’t give you a reason for the refusal so it is very hard to figure out what to say and not to say. In any case, I  would have been given only 5 days transit visa for Turkmenistan and I know that I would not have been able to cycle the over 500 Km to the Uzbek border but it was sad to break my overland journey and arrive in Tashkent by plane.

I was really worried about entering the country having read how strict they at customs; things like medications containing codeine are strictly forbidden and I was told they check your electronic devices for religious books and your photos for anything they consider contentious – what is contentious is not clear – and impose heavy fines if you fall foul of the law. With that in mind I had left my codeine painkillers in Iran and uploaded in Dropbox any of the eBooks I thought could be considered problematic. As it happened, I sailed through customs which was a relief.

After the noise and chaos of Tehran, Tashkent was orderly and calm, cars stopped at traffic lights, they followed road rules and they didn’t use their horns all the time AND people crossed the road at pedestrian crossings. It was a real culture shock!

Tashkent was the place where I was getting my Tajikistan visa. That went really smoothly although I came across the first instance of official corruption when the man at the embassy tried to charge me 100 USD telling me it was an express visa.  I pretended to be shocked and requested to speak to the consul and in an instant the fee was reduced to 50 USD for the same express visa!

Because of my knee problem I had been off the bike since Shiraz in Iran and I  couldn’t wait to experience the wonderful sense of freedom I always get when I am riding. I need Uzbekistan I cycled longer daily distances mainly because you need to register in a hotel at least every three days and outside the tourist circuit, not all towns have hotels.

Getting out of Tashkent was easy and I relished being amongst green cultivated fields: strawberries, wheat, fruit trees,  rhubarb. A real rest to the eyes after my last cycling days in the Iranian desert. I got to the town where I planned to stay the night in good time, cycled to the town motel and a disheveled woman with an untidy mop of hair opened the door. The place looked dirty and insalubrious and the woman asked me for an astronomical amount for the night. I didn’t get a good feel for the place and by now I have learnt to follow my instincts so I left for the next town knowing that I was cutting my options: by the time I got to there it would be very late and I would have to take whatever I got offered. I was lucky and although late I was able to find a clean, comfortable place to spend the night.

The cultivated land gave way to pastureland, flocks of sheep everywhere being looked after by very young shepherds, some of them children still. Then the old mono crops ‘soviet’ farms with names like State Farm 3A appeared. Small groups of men and women worked the fields closely supervised by men in shirts. Every now and again I saw them resting by the water canals, under trees escaping from the unforgiving sun.  I didn’t see many tractors working the land. 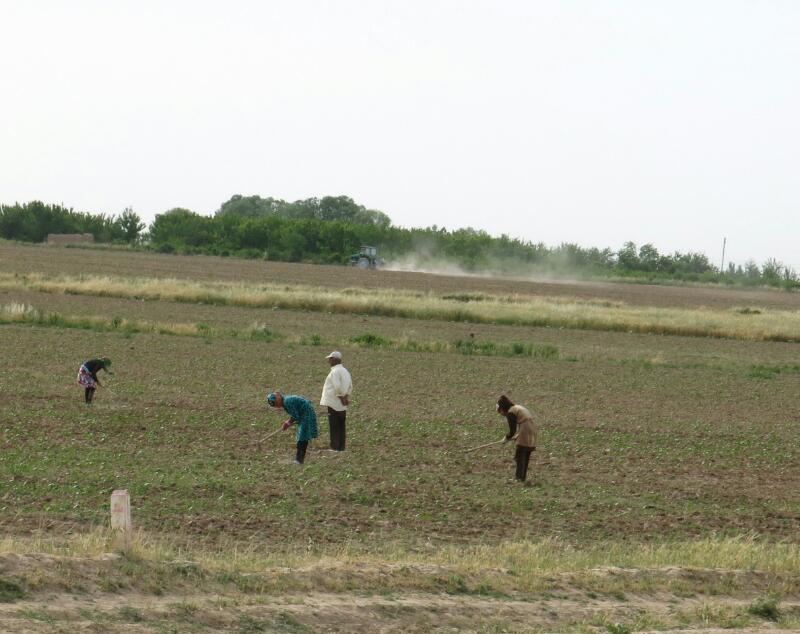 From then on I really started to feel the heat, rivulets of sweat trickled down my back and dripped from the tip of my nose to my thighs. I tried to cool down by dipping my shirt in the canals regularly. It was bliss to put on a soaked shirt and feel cooler, even if it was just for a few minutes. To add to the heat the road surface was atrocious, at times, the broken tarmac disappeared altogether to give way to a stony track. It was really hard going and soon it became clear that I would not be able to get to the nearest big town with a hotel but with so many people around in the fields finding a discreet place to camp seemed near impossible and I decided to ask some local people for a place to camp. Soon I was surrounded by a small crowd and everyone had a different opinion of what I should do and eventually I accepted the offer to stay at the house of a young man from the village and his wife. 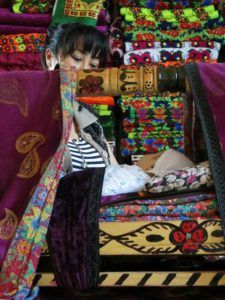 When I walked into their house I realized that they were very poor, as was the whole village, a collection of small mud houses without running water and a common latrine.

Abbas and his wife had a sweet little baby girl. I was surprised to see how the traditional cribs have some straps to help swaddle the baby.  Each time the baby whimpered her mother breastfed her by leaning over the wooden frame of the crib with the baby still tightly strapped in inside.

After a while, Abbas’ father showed me an old photo album from the time when he was in the army.  Black and white photos of young men from all corners of the Soviet Union filled the album which was decorated with stickers of colorful flowers. He was clearly reminiscing and his smile told me that the photos brought fond memories for him. 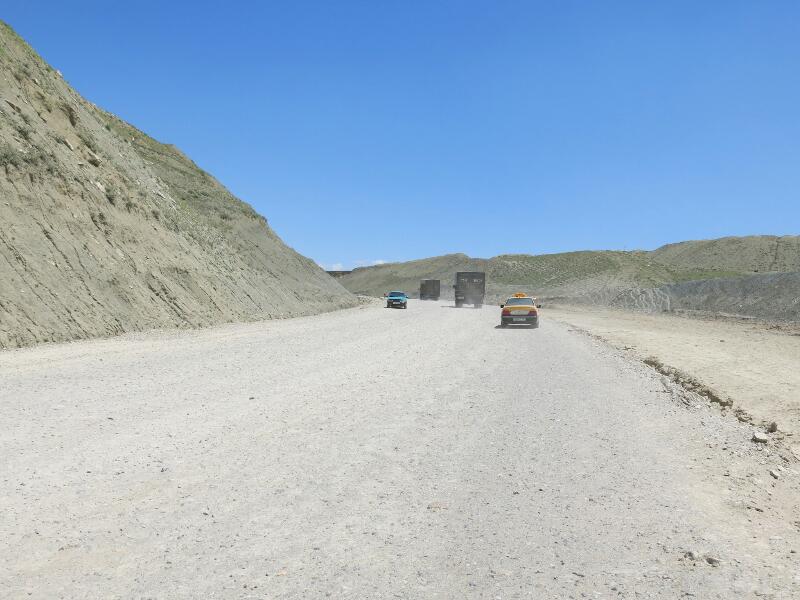 The heat continued until I got to Samarkand as did the bad roads and by the time I got there I had to admit to myself that I hit a low, the first one of my trip. My knee was still complaining, I was covered in flea bites from my night in the village, I got the first burst blisters in my bum, I didn’t feel like eating and to make things even worse it downpour for two days solid. My worries about my ability to do the Pamir Highway surfaced. Will I be able to do it? Do I have too much weight? Is it more than I can chew?

All I wanted to do was to stay in the hostel and not move but I made myself admire the beauty of Samarkand and with Tineke and Marcel, some other cyclists I met at the hostel organized a visit to Bukhara and Khiva, two of the main tourist Uzbekistan destinations, a decision I didn’t regret as both were truly magical places. By the time I got back to Samarkand my spirit was in a much better place and felt physically better and was ready to face the nearly 500 Km left until I reached Tajikistan.

Big climbs followed by steep down hills, switchback after switch back with wonderful views of snowy peaks. I had to stop frequently to be able to admire what was around me because the conditions of the road surface were just appalling. That night, once again, I didn’t make it to a town where I could find a hotel to register in and I camped in what seemed to be an old workers holiday camp. It transpired that the offer of the locals to camp in the place came with a price. After some haggling a price was agreed and I knew it was too much when the keepers of the place seemed to be embarrassed to take the money and when that night I ended up having my own personal body guard: one of them planted his mattresses not too far away from my tent to look after me and my belongings. That night I went to sleep to the sound of his prayers. 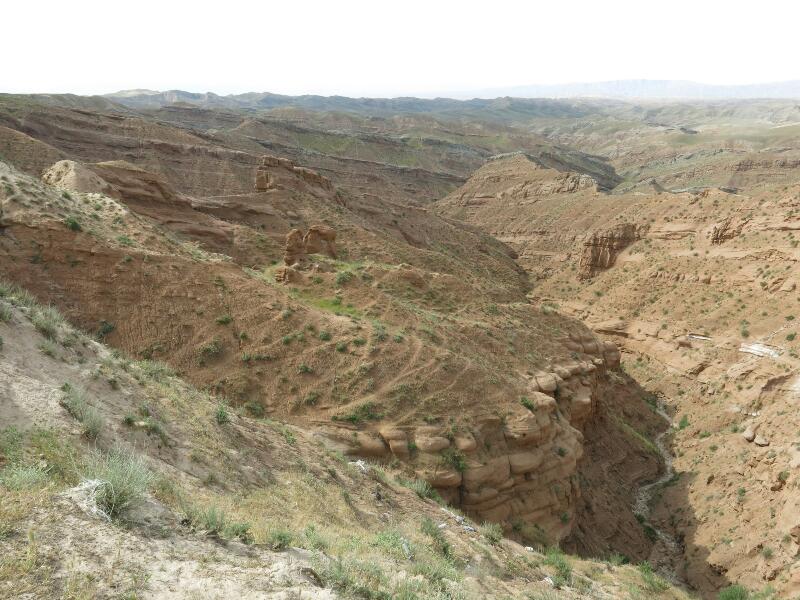 The green fields changed to bare sun baked mountains and with the changing landscape the flocks of animals changed too, the cows and sheep disappeared and gave way to goats. The constant heat soaked up my energy and the relentless haggling made me feel I had to be constantly on guard. It got to its climax when changing money in the black market as everyone does in Uzbekistan. The man I was having dealings with tried to give me half the amount that I was due.  He used the old trick of sandwiching notes of a lesser value in the middle of a wad of money and then getting angry with me when I challenged him and throwing the dollars back in my face. 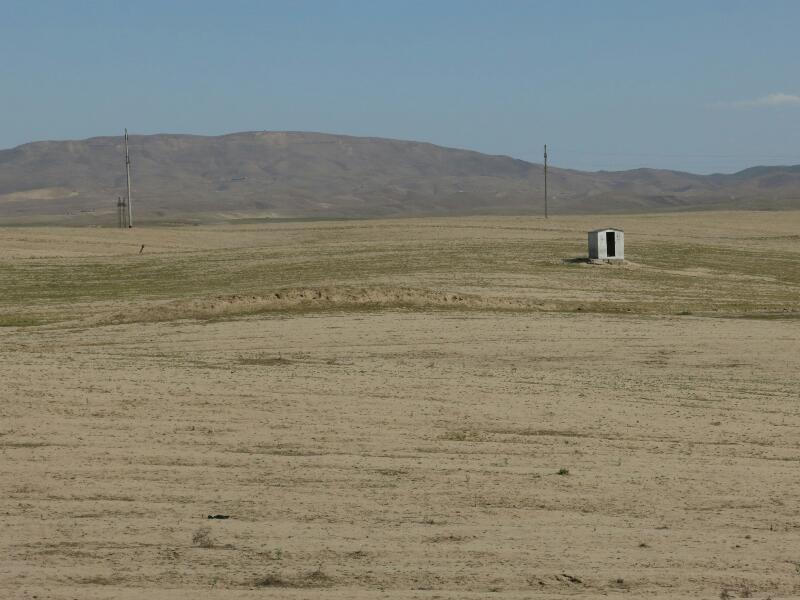 And so amongst haggling, welcoming headwind because it cool me down and getting off my bike when the road surface got too rough I got to the border with Tajikistan. The parting gift from Uzbekistan was a thorough check of all my belongings. It took me over two hours to get through the Uzbek customs. They checked every medication I had on me and asked me questions about the books I carried. They checked every photo in my camera, tablet and i Phone and after an intense discussion between five custom officials, they asked me to delete a photo which had a fire engine in it.

I have found Uzbekistan challenging.  I found it harder to relate to its people and I found the cycling hard. Maybe it is the contrast with Iranian people, maybe it is the heat and the harsh landscape, may be it is the time I’ve been in the road, I don’t know.

I am pleased to say that now after a few days in Dushanbe with other cyclists in the most amazing Warmshowers host I am really looking forward to the Pamir Highway.