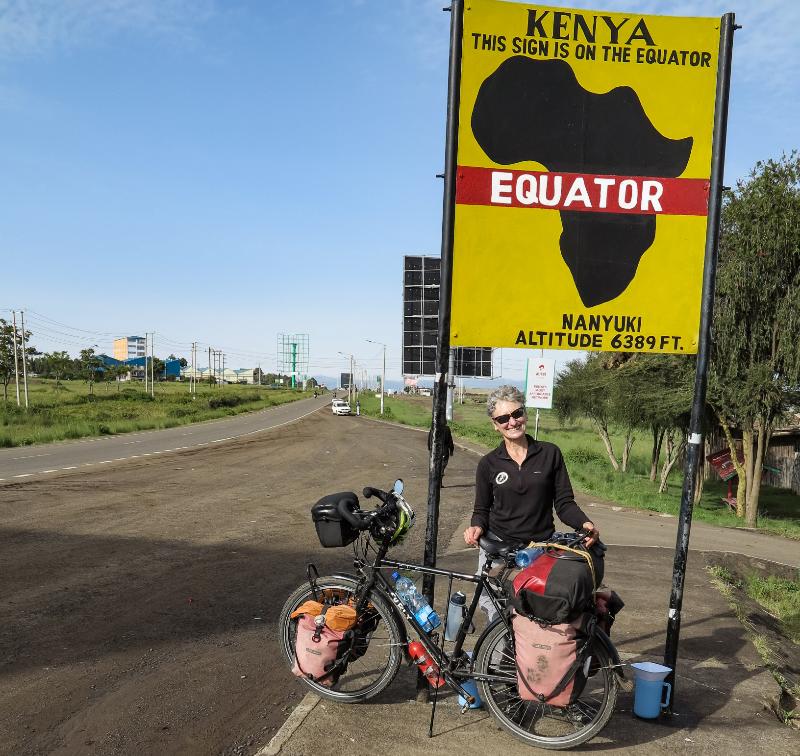 By the time I got to the Guesthouse I was cursing myself. Why on earth did I buy that half a kilo of sugar? As I was paying for it I already knew that I didn’t need it because the day before I had bought some honey from one of the women selling it by the roadside.

My panniers were already heavy enough with all those just-in-case things I have with me. Why do I carry so many just-in-case things? Is it my attempt to live this nomadic life  by the standards of my sedentary life? or Is it my way to make ordinary this extraordinary journey? or do I need all those things to feel safe?

It was quite clear that I didn’t need to carry so much food in a country like Kenya where there are small roadside stalls and shops everywhere selling everything I need for my daily living, not to mention the cafés with cheap, delicious stews and milky sweet teas that I have become addicted to.

After Ethiopia, Kenya felt like a rest. The contrast between the two countries was staggering. From the  moment I crossed the border I entered a different world where people helped you with a smile and didn’t ask for money,  children waived as I went by shouting “mzungu” (white skin) and the prices remained constant.

One thing that strikes you right away about Kenya is how clean it is. Plastic bags were banned nearly a year ago with strong penalties to those disobeying the ban. The results are incredible, the roadside is clean, there are no plastic bags flying on trees, there are no more ‘flying toilets’ (people used to defecate in a plastic bag, tied and knot and and then threw it away) and people talk about how plastic is bad for the environment. I wish more countries followed Kenya’s lead.

Although roads are clean, the same could not be said of some guesthouses that looked seriously dodgy, particularly in small villages. When I felt my health would be better served by staying in my tent, police posts and police stations became my default camping spots. Their hospitality was fantastic. I was always received with a smile and given water to cook and wash with and in a couple of occasions they even gave me an empty room to sleep in.

Police posts provided continuity to the changes in landscape and people as I crossed the country. In the North I was struck by the traditional costumes of the Samburu people and their colorful jewellery. Sheperds would come onto the road dressed in full regalia with big machetes hanging round their waist and looking quite fierce as they demanded water, sometimes quite aggressively. I learnt to scan the scrub for livestock and listen carefully for the sound of the bells around the cattle’s neck. I would then get ready to throw one of the small bottles of water that I carried in my handlebar bag  as soon as I saw the sheperds coming towards the road and quickly make my scape.

In Samburu county I went to Umoja Women’s Village, a women only village set up 28 years ago to provide refuge to women victims of domestic violence, rape and female genital mutilation. The women make their money by selling traditional jewellery and by running a nearby campsite. They used to have cows but after the village got raid by cattle thieves it became too dangerous to own animals and now they have none.

I stayed in one of the village huts. The hut was built with sticks and dung and had some plastic sheeting in the roof for waterproofing. It was very dark inside and at night small coppery crockoaches took over the place. It was sobering to experience the environment in which these women live and to be invited for tea at Rose’s hut and see how little they have and how they live one day at a time buying enough sugar and tea for that day. They don’t need just-in-case things, for them safety is about being together, away from their abusers.

The meaning of what it means to be safe came up again to my mind during a big climb towards the Equator, in an area with huge farms protected by electrified fences and a tea shop that would be perfectly at home in Kent whilst  marginal farmers grow potatoes and corn in the barely five meters that separate the road from the electrified fence. That small piece of land where they could grow food was their safety.

By the time I got to Nairobi something had shifted inside me, I relaxed and trusted that the road would meet my needs – a small cafe would appear at the right time, a place where I could pitch my tent, company when I needed it.

And it did! It was really nice to meet Guy again at Jungle Junction, a well known overlander campsite in Nairobi. Guy is travelling from London to South Africa on his motorbike and I had met him twice before, the first time in Gonder and the second in Addis. He was the one that saved the day by giving Amaya a lift to the airport on his motorbike when it was apparent that a taxi would not materialise.

It was bliss doing all those ordinary things that normally I do by myself with someone else without  cultural or language barriers: deciding what to have for dinner, shopping, ordering take away pizza and cooking together.  I was tired and needed some down time and when best to have it than when there is good company.

By the time Ieft Nairobi I was re-energised and when round a corner I was regaled with the most amazing view of the Great Rift Valley I had to stop to take it all in. The view was breathtaking but it was the realisation that I was in Africa, in the Great Rift Valley that was joyful and overpowering.

The next few days were filled with the same  childlike joy especially at Kilimandege House, the place where Joan Root, the film maker and conservationist, lived and died. Sitting in her baranda at dusk I saw giraffes, hippos, zebras, water bucks, dik-diks whilst in the day monkeys came into the kitchen to steal bananas.

Kilimadege House is a magical place where the animals roam freely without the restrictions of electric fences. The house is being lovingly restored by Joseph and is an oasis of peace. It was very special to see Joan’s bedroom where she was murdered for her commitment to conservation but also where dreams and plans for the wonderful films she created with Alan Root were born.

Maybe it was my new state of mind but things just got better and better – a meeting with Asier, another basque cycling in this amazing continent, pink flamingos in Lake Bogoria, majestic acacia trees, camping in a school where the girls were totally amazed by the whiteness of my feet and kept on touching them, the beauty of Kerio Valley, spending time with the Cheptebo community, dancing on the road with an older woman selling bananas, talking politics with a widow-mango-grower…

As for the bag of sugar? I hope it is being enjoyed by the old man to whom I gave it to after he helped me push the bike for a few meters in a particularly steep stretch of road.

19 thoughts on “Learning to let go in Kenya”