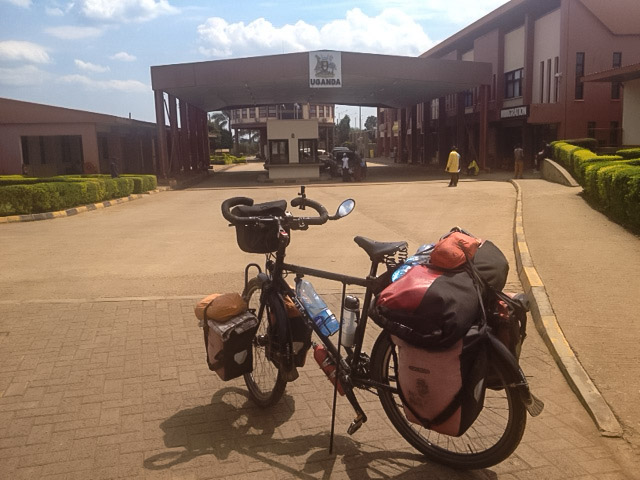 “If you are going to your tent now, mind he hippo” told me the friendly Italian who, impressed by my bike journey, had invited me to a beer. I leaned over the balcony of the restaurant and sure enough a huge hippo  was happily munching grass just outside my tent. Nothing for it but to wait until hippo finished its meal whilst I continued my conversation about bike travels in Africa with Alco the Dutch cyclist also staying at the campsite.

I was at one end of the Kazinga channel in the West of the country, very close to the Democratic Republic of Congo. The Kazinga Channel is a beautiful stretch of water joining Lake George with Lake Edward.

Only three days earlier I had been in the Channel with Ngozi, a friend from London who had come to Kampala to join me for a few days. The channel is full of life – hippos and elephants everywhere. So much wildlife that I was like a child not knowing where to look, going from one side of the boat to another I wanted to take it all in, fix it in my memory forever .

My encounters with wild life in Uganda started right on my first day when camped on the lawn of the beautifully landscaped gardens of a hotel I had a whole family of  blue balled monkeys greedily eyeing my bananas and not going away even when I tried to scare them off.  Monkeys  here don’t scare off easily, it was funny to see big lorries having to stop after noisily blowing their horns to get a family of baboons off the main road without success. I quickly got used to seeing them on the roads each time I went through  wooded areas and was happy to see that they didn’t pay any attention to me.

The monkeys didn’t pay any attention to me but people, in particular children, came running to the road to call out mzungu (White skin) and wave as did street sellers. Stalls selling fruit and vegetables where easy to find, as we’re the chapatti makers in the bigger villages. Chapattis in Uganda are not like the ones we get in Indian Restaurants in the UK, they are thick and oily and made with egg. I loved those gigantic  pancakes cooked in a griddle by the side of the road. The ready access to food made me feel at ease and relaxed.

The number of cyclists on the road also made me feel at ease. I saw bikes everywhere heavily loaded with everything imaginable charcoal sugar cane, maiz, mattoke (green bananas). The country is very hilly and the roads are a constant rollercoaster so I often saw cyclists pushing their bikes up the hills, their bodies nearly parallel to the road on the steepest ones.

It didn’t take me long to come to terms with the fact that there would not be flat riding in Uganda, the ups and downs were constant. I have mixed feelings about hills, on the one hand I do find them hard to climb but on the other the hilly terrain makes the landscape more interesting and Uganda is a truly beautiful place. I was happy to know that I would be sharing its beauty with a friend.

Ngozi arrived in Kampala with her bike excited and apprehensive and after a day’s rest we were ready to go. She had never toured before and had to get used to her loaded bike and I had to get used to being with someone else. Together we had to find a rhythm that would suit us both. It wasn’t long before we found it – a good breakfast, some cycling, lunch of delicious avocados and chapattis by the side of the road, usually in a village, more cycling and at some point in the afternoon deciding where to spend the night.

Being with someone who had never toured was like having a mirror put in front of me. I think nothing of the drop toilets and bucket showers found in the cheap guesthouses that are my staple accommodation, of camping in dusty police stations, of the uncertainty that fills each one of my days on the road. Seeing Ngozi’s reactions made me realise how used I have become to this way of life, how much I have changed. Living with uncertainty is no longer the challenge it used to be.

Not all is uncertainty though, I knew I wanted to go on a game drive and when best to do it than when I had someone with whom to share the experience with. It was really nice to  visit Queen Elizabeth National Park with Ngozi, to have someone to turn to when seeing a leopard sleeping in a tree, elephants walking by the water or hippos sunbathing.

But then it was time for Ngozi to return to the UK and when I crossed the Ecuator for the third time I was on my own. The awareness that it would be months before I saw the familiar skies of the Northern hemisphere again hit me. For months to come the Southern Cross would become familiar company in the night.

It felt right to start this new phase of my journey crossing the National Park on my bike, first in a tarmaced road and then through 74 Km of dirt road. I was quite nervous when it came to riding the later. I had been told to be careful with elephants and  buffaloes that are abundant in the area as they are known to charge. And indeed there was a lot of evidence of their presence,  piles of dung and heavy footprints where everywhere. I keep on listening for them and was delighted when I reached my destination without any close encounter.

The ride was memorable, clouds of white butterflies feeding on the elephant dung took flight as I passed by and enveloped me, savanna, thick forest, monkeys, impalas…So much nature and wildlife all around me. At times I felt I was disappearing in the middle of it all, it was as if I was becoming part of the forest, the savanna, the river.

The forests in Uganda are incredibly lush and their impossible slopes they provide sanctuary to the mountain gorillas, an endangered species, according to the last published census there are only 880 left in the world. How could I be in this country and miss out the opportunity to pay them a visit!?

To get to one of the only two surviving populations I had to get to the remote Bwindi Impenetrable Forest, climb steep gradients in dirt roads and then walk for hours into the forest. I knew I would find the ride too hard but was more than ready to push my bike for hours to get there so I was delighted when a local told me about the tea trucks that go to the very remote mountain villages to collect tea from small tea growers. I made up my mind: Foxtrot and I would find a way to get a lift in on one of the tea trucks.

The two of us waited patiently outside the Kayonza Grower’s Tea Factory and when the truck going in the right direction left the factory we managed to get on it. When empty of tea, the trucks provide transport to people from the remote mountain hamlets and settlements. Villagers and their possessions came on an off the truck in each of the hundreds of stops it did along the way.

All around the red earth road, in impossible slopes, villagers  were clearing the forest for cultivation, carrying jerry cans of water, picking and carrying tea. On the lorry I was trying out my newly acquired local vocabulary to the amusement of my travel companions who laughed heartily, holding their sides, each time I uttered a word.

It was unreal when the following day I found myself tracking the gorillas in the forest. The light was filtering through the huge tall columnar trees with bare trunks and a crop of leaves at the top. There was not a square centimeter that was not covered with some sort of vegetation. We crossed swampy terrain, climbed up and down incredibly steep slopes following the rangers that were opening the way through the forest with their machetes.

The encounter with the first gorilla was unforgettable, Kabandize a young male was lying down looking at us with lazy eyes that seemed to be saying “Oh bother, here are the humans!”

Not far from him was Rukara, the silver back and leader of the group with the oldest female in the group and her baby, a delightful one year old.

The gorilla group kept on moving fast through the forest and with the trackers hacking away at the forest with the machetes we followed on their path. After one hour with these incredible creatures we said goodby to them and turned back the way we came.

The feelings of the experience stayed present and I knew I needed time to let it all sink in. I turned my back on Bwindi Impenetrable Forest and reached a small island in Lake Buyonyi. Swimming in the second deepest lake in Africa (900 mt) surrounded by bird song and knowing that no hippos would come to my tent was the perfect ending of my time in Uganda.