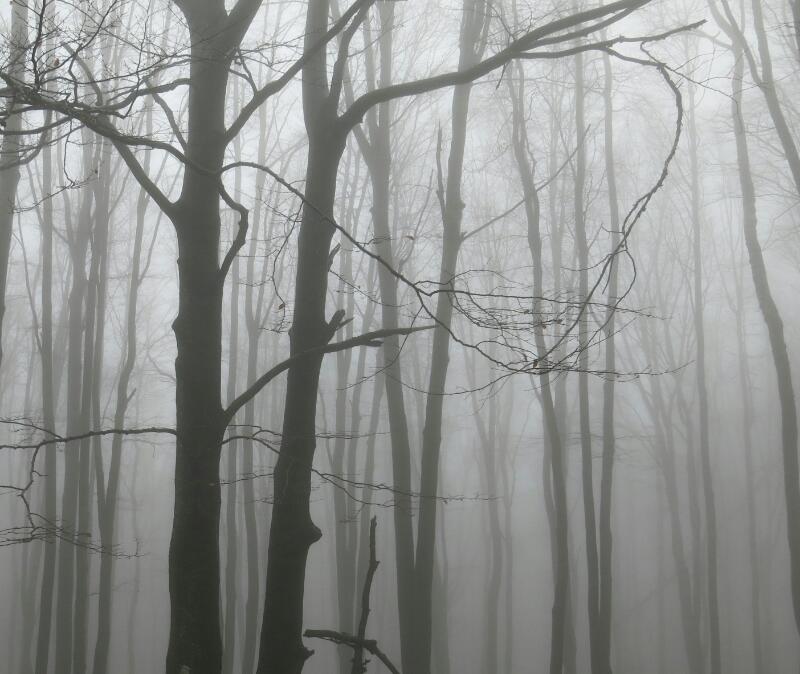 Generally,  I only have a rough outline of my route which I refine it as I go along and talk to local people I meet along the way.  A few people had told me about the Buzludzha Monument.  My very first Couchsurfing host even showed me some photos of it.  It was like nothing I’d seen before and I added it to the list of places to see.

To get there I first had to climb to the 1,190mt Shipka Pass and then on to Buzludzha further up the mountains. The day was grey and wet and I cycled all the way to the pass in total cloud. 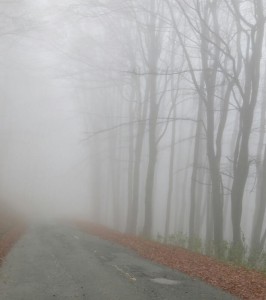 The road a black ribbon and the trees either side of the road like tall vertical black columns reaching for the sky.  The black and white monochrome was only broken by the rusty colour of the fallen leaves and the green of some weeds refusing to die with the frost.  The scene reminded me of one of those arty photoshopped pictures in black and white with a few notes of colour.

I climbed the hairpins of the road slowly and steadily on the lowest gear.  I relished the feeling of my body working hard,  the power of my leg muscles taking me and Foxtrot up the steep hill, the tickling sensation of the rivulets of sweat trickling down the middle of my back and dripping into my eyes and down  the tip of my nose in spite of the low temperature (3C). I was totally in my body.

Without any conscious awareness I was listening out for traffic on the road. The cloud distorted the sounds and at times I couldn’t tell whether the cars were coming towards me or from behind me. The fog was so thick that all I could see were their ghostly headlamps when they were just a few metres away from me. And yet I felt really safe under the blanket of the cloud.

It was nearly dark by the time I made it to the Pass. I knew that there was a hotel at the Pass and I headed for it.  The place was locked but as I could see fire glowing in a wood burning stove inside I knocked at the door.  A woman opened the door and let me in. As I stepped in my senses were instantly assaulted by colours,  everything  looked very bright after the hours I had spent in a black and white world.

That night as I was going to sleep I thought about how lucky I am to be able to get myself in the warm at the end of the day without overly worrying about money.  Age has its advantages!

In the morning the world was again covered in cloud and was raining heavily. The silence was so intense that I could hear a buzz in my ears.

Taking advantage of  a break in the rain, but still in thick fog,  I started the 12 km climb to the monument. The road was very steep and I focused on steering the bike to the bits with the shallowest potholes. After what it felt like a lifetime I reached the end of the road and but still I could see no sign of the monument.Then the cloud lifted a little and I could see what looked like a massive UFO towering just above me and small, muddy path leading to it.

Gingerly,  step by step I got myself and Foxtrot to its base. When I got my breath back I lifted my eyes and was amazed by the scale of the place. Graffiti covered the concrete which was crumbling in places.  I circled the monument a couple of times not quite believing what I was seeing.  Big stairs,  which I had managed to miss in the fog,  led from the road to the main entrance which was blocked.  Just round the corner of it someone had made a hole in the concrete  and it was possible to climb inside.  I considered it for a moment but being alone decided it wasn’t wise to enter the crumbling building.

As I started going back down the fog lifted and the mountains showed themselves in all their glory and Buzludzha stood proud on top of one of them.  I stopped,  looked at it and laughed aloud,  how could I have not seen it until I was right on top of it!

3 thoughts on “Buzludzha – The folly in a mountain top”