Ever since I heard about the painted Monasteries of Bucovina I’ve wanted to see them. Many of them are UNESCO sites. Their painted exterior walls are decorated with elaborate 15th and 16th century frescoes featuring portraits of saints and prophets, scenes from the life of Jesus, images of angels and demons, and heaven and hell. The purpose of the frescoes was to make the story of the Bible and the lives of the most important Orthodox saints known to villagers by the use of images.

Something else I wanted to do was to stay in one. I knew it was possible because a few people had told me so. I just wasn’t sure how to go about it. The opportunity to try it out arose on my way to Galati where I was going to get the train towards Bucovina, quite a long way away from the Black Sea 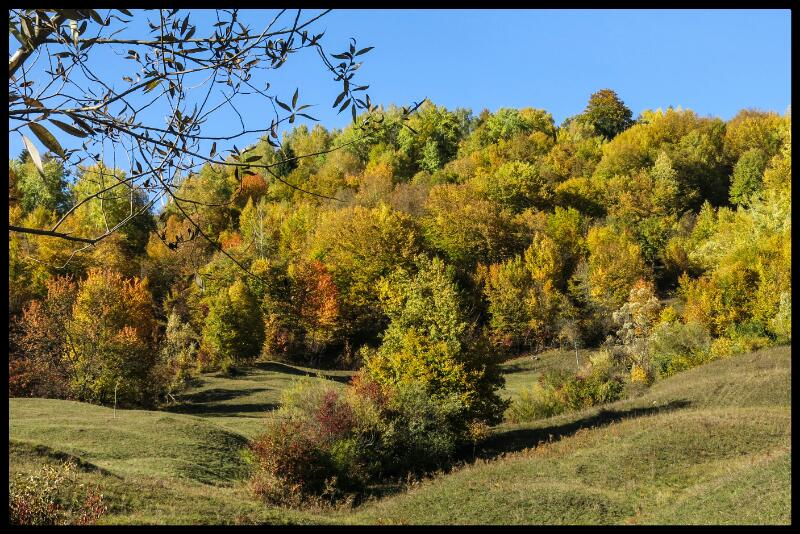 The colours of the Autumn were just stunning and getting better by the day. It wasn’t too long before I arrived at Cocos Monastery.  I decided to try asking for accommodation.  I was a bit nervous,  I just didn’t know whether I  could make myself understood and what the response would be and it was  getting late to find an alternative place.

From the  distance,  the Monastery was beautiful. Nestled in the forest with shinny metal roofs.  A monk was tending to a herd of goats in the middle of well looked after vineyards. As I approached,  I  saw another monk looking after a flock of turkeys and yet another two after some cows.

I left the bike outside the gate and went in. There was no one in sight.  I went into the church hoping to find somebody.  It was beautiful and peaceful inside but still no one to be seen.  I heard  a voice coming from what I thought must be the monks rooms and found  a monk talking on a mobile phone. Such modernity looked out of place  in this space where it seems time has stopped.  When he finished,  I asked by signs if I could stay and right away I was taken to a whitewashed room with a couple of beds and left on my own.

Soon after a monk was calling to prayer with a wooden tool.  The tradition started during the siege of Moldova by the Ottoman Empire when the Turks forbade the ringing of bells. The striking of wooden or metal bars, known as <em>”toaca”</em>, replaced the ringing of bells and thus, became a tradition. On that day the bells were also ringing in the belfry. Those two sounds were mixing with the tweeting of birds,  the pitter patter of rain and the noise of people walking.

Sitting in the dark outside my room,  I was transported to a  ritual that could  have taken place centuries ago.  It was  very dark,  the only light in the place coming from the Monastery and by now it was raining so heavily that the water was bouncing back from the stone floor of the church courtyard.  Monks clad in black cloaks willowing in the wind and the rain  were hurrying towards the church. All I could make out were their dark shapes entering the church and when they crossed a shift of lightof light,  their long beards and their hair tied in a ponny tail.

The service started and the sound singing from the church filled the whole space. Every now and again a few stragglers crossed the courtyard and later on two women dressed in long  black skirts and headscarves joined  the service.  I was entranced and felt privileged to be there.  That night I went to sleep to the sound of Monks chanting.

I stayed in other Monasteries – Pangarati,  Sihăstria and Sucevita and each was different and special.  The last one,  Sucevita,  is one of the famous painted ones.  A community of nuns lives there.  One of the nuns,  sister Stefania, took me under her wing.  She offered me food in the communal dinning room,  aa simple meal of polenta,  cheese and milk. The cheese and milk came from the Monastery herds.  The flavour of the milk took me back to my early childhood  when I used to sneek in the pantry to drink the milk that had been brought by the farmer that morning.

That day I joined the nuns in the service. Some nuns were kneeling,  others sitting and standing.  The priest in big robes and a hat with a big veil on it went round the room with an incense burner,  whilst the nuns chanted. Once again I was mesmerised by the whole thing. A magical experience.

When I left the following day,  Stefania gave me apples, cards with images of the icons,  a cross and a little money to buy bread.  I was moved to the core by her generosity.

On the road to Transylvania feeling the luckiest,  richest woman on earth having the opportunity the live all these experiences.

12 thoughts on “Cycling round the Romanian Monasteries”