I let out a big sigh, the strong wind had changed direction again and I was pedalling furiously against it, progressing very slowly and getting very tired. Head wind saps my energy and I need to stop fairly regularly to recoup my strength and be able to keep going.

No one had mentioned the wind when talking about Botswana. I had read about the long distances, about having to sleep in the enclosure of telephone masts to be safe from the wild life which is everywhere in the country but wind, wind wasn’t in my consciousness and here I was battling against it.

It was true about the wildlife though, I experienced it on my first day in the country  from the safety of a boat in Chobe National Park. Hundreds of birds, a matriarch  leading a herd of elephants by the waterside, baboons playing, buffaloes, crocodiles… We got very close to some huge crocodiles feeding on an elephant carcass but had to move on quickly as the stench of the roting flesh was unbearable, making us gag.

From Chobe I decided to have a brief foray into Namibia where I began to experience the heat, the wind and the long distances without water. In spite of that, I loved the Caprivi Strip, the trees there have so many different shapes, heights and colours. The trees and the interesting traffic signs provided amusement to the otherwise flat landscape. 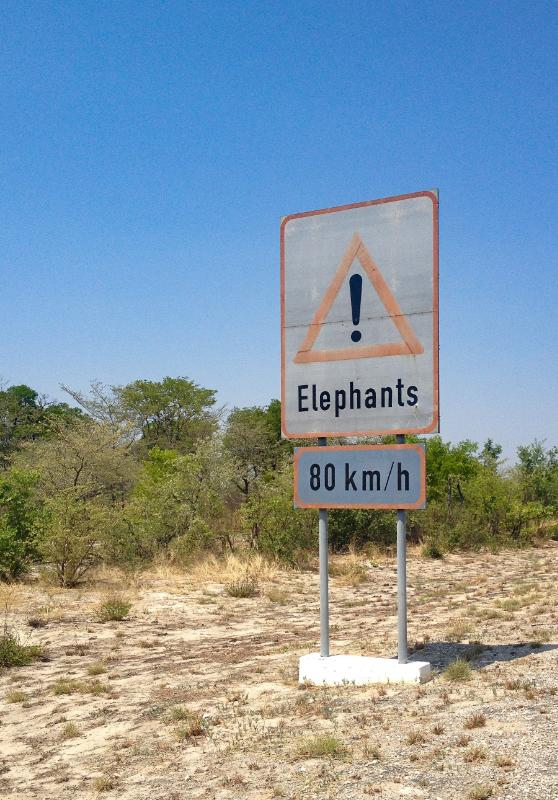 The Delta is in Botswana and as I re entered the country, the wind became less predictable, constantly changing direction, but the flatness of the terrain allowed me to get a rhythm, the rhythm of the road: I cycled for about 30 Km, had second breakfast; cycled another 30 Km, was hungry again and had lunch, usually leftovers from whatever I had cooked the night before; kept going for a bit longer and by about 80 Km I began to get tired, pushed on for a while looking for a safe place to stay the night and as soon as I found one stopped.

There was something different about Botswana. People didn’t ask me for money as I passed by, a first after months of constant demands. Only then, by the absence of these demands, I realised how stressful it had been at times. How in other countries I had avoided stopping by the side of road anytime I saw people because I didn’t want to get asked for money, food, water, my bike…

Botswana is one of the less populated countries in Africa and it is their Government’s policy to give everyone a piece of land where to build their house, keep cattle or open a business. The villages in Botswana looked very tidy, round or square huts with grass roofs. Often hidden in the bush they had signs to indicate their location and huge water tanks with drinking water. Life felt easier than in other countries I’d cycled through. Maybe that’s why the attitude of the people was different.

It was great to be able to find drinking water anywhere there were people but with temperatures over 40 Celsius, the water got warm really quickly in my bottles. I was drinking more than 6 litres a day and the water wasn’t quenching my thirst, I drank and drank but my mouth and throat were always dry and my tongue stuck to my palate, I had to find a solution. Asier suggested wrapping my water bottles in wet cloths and it worked, the water stayed cool for longer, what a relief!

I met with Asier in Maun, the heart of the Okavango Delta. On the road you get close to people really quickly and by now Asier was my pal. We had met  for the first time in Nakuru in Kenya and our paths crossed again in Malawi and in Zambia where agreed to meet in Maun, cook a Spanish omelette, have some beers and explore the delta together.

The Delta was everything it promised to be. We drove through deep sand to get to a campsite in the middle of the Moremi Game Reserve. The BaTawana people concerned by the rise of hunting in the Okavango Delta declared the area a Game Reserve in 1963. It was the first wildlife sanctuary to be created by an African tribe in their own area and now wildlife thrives in the Reserve.

We were setting up the tents when some elephants decided to walk through our pitch and we had to make a run for the vehicle for safety. A whole family of elephants went by, two babies with fuzzy downy hair still covering their heads were playing with one another in the middle of the herd, their small trunks going all over the place. I love how uncoordinated they look, how funny.

It was late in the evening when we heard a conmotion amongst the elephants and it was only in the morning that other campers told us there had been lions in the campsite trying to hunt the baby elephants and the adults had scared them away. The lions must have been very close to us because before going to sleep Asier had told me how he had seen some yellow eyes reflecting back the light of his torch when he was walking to the tent. In the light of the morning I thought how in the middle of the night I had gone behind the tent to relief myself and  shivers run down my spine.

The lions were still very close to the campsite in the morning and we managed to get very close to one of them. He didn’t seemed to be bothered by us, he just sat there watching us watch him and in his own time, stood up, turned his back on us and walked away.

It was not only the elephants that had new babies. We saw a newborn wilder beast, the umbilical cord still hanging out of his mother who hadn’t yet expelled the placenta, baby jirafes, baby impala. All the animals giving birth just before the rains when food would be plentiful. I just hoped the rains would arrive in time because throughout my months in Africa, the pattern of the rains seemed to be broken, raining when it should’ve stopped and having dry weather when it should be raining. Climate change exposing its ugly face.

The lack of rain would also have a huge impact on the communities living in the delta. We had a chance to go into its heart when we took a mokoro trip through its narrow canals. The mokoros are the traditional canoes used in the Okavango Delta. They are propelled forward by standing in the stern and pushing with a long pole. The traditional mokoros were made by digging out the trunk of a tree but now they are made of fiber glass. Dreamer, our mokoro punter, still had one of the traditional ones in his village right in the middle of the Delta.

We silently moved through the water keeping an eye for hippos which are known to position themselves under the mokoros and pushed them up to overturn them. We didn’t see any but we glided pass beautiful water lilies and water birds.

After these wonderful times together, Asier and I said goodby at a cross roads hoping to meet again in Namibia in 2019, little did we know that we would meet again briefly once more before leaving Botswana.

There was, one more thing I wanted to do before leaving Botswana, I wanted to pay a visit to the Khama Rhino Sanctuary in the hope to see the last of the Big Five left for me to see.

Cycling long hot days in relentless wind I arrived at the Sanctuary and went on the search of rhinoceros with one of the sanctuary’s guides. It didn’t take long before we found them by a small pond – a huge bull, two females and two younger males.

The bull came really close to the hide where we were, he was huge and covered in mud. He went over to a tree  to sharpen his horn. I was speechless and very moved. The whole scene was bathed in a beautiful light:  impala coming for a drink, warthogs wallowing in the mud whilst the rhinos relaxed by the water. I don’t know how long I spent watching these incredible animals in silence.

For a while I’d been trying to decide where to enter South Africa, should I go to Zimbabwe or enter via Botswana? I met so many South Africans who told me to avoid the Zimbabwe border that in the end I’d decided to enter through a small border near Gabarone, the capital of Botswana. At the Rhino Sanctuary I met yet more South African campers who told me I had made the right decision AND I was to avoid Pretoria and Johannesburg at all costs!

I crossed the Tropic of Capricorn getting closer and closer to South Africa, the southernmost country on this trip. The plan was to spend New Year’s eve with Lucy and Liz, a mother and daughter pair I had met in a campsite 300 km from the border.

It was really nice to know I’d meet some friendly faces soon after going into South Africa because now it was not the wind or the heat that worried me. I was worried about being hurt.

21 thoughts on “Botswana – Heat, Wind and the Big Five”