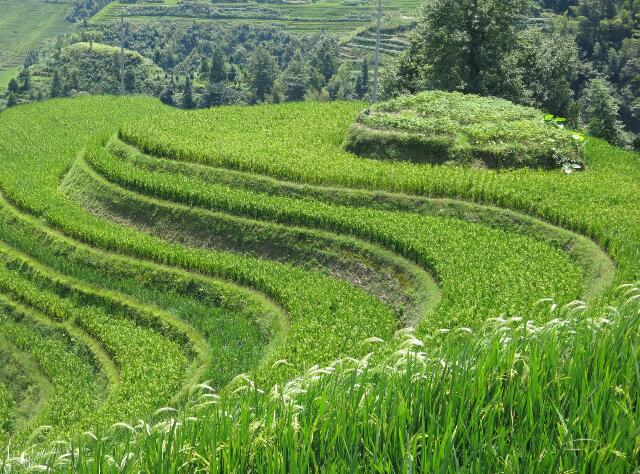 And it really did feel like I was in a different China!

As I started the descent into Chengdu changes started to happen, imperceptible at first – in the villages Chinese flags began to appear next to the Tibetan prayer flags until they eventually replaced them completely; the yaks disappeared from the mountainside and with them the delicious yak yogurt stalls by the side of the road also went; people’s faces changed as did the clothes they wore.

I reached a place called Wenzou after cycling through fields of ripening tomatoes, orchards of plums and other fruits. After weeks of being deprived of fresh fruit, I kept on stopping at road side stalls and having a feast.

In Wenzou,  for the first time I had problems finding accommodation, the first 7 hotels I went to didn’t accept foreigners but eventually I found one that did. Apparently the reason for this has to do with their ability, or lack of, to scan your passport, Visa page and last entry stamp and report it to the police. In the end it was just a question of doing the rounds.

Wenzou still has bike taxis, the first ones I’ve seen and a lovely market full of plums. Markets are still my favourites places. I love their activity, their noise, the smells and they are the perfect place for people watching.

The road followed the valley of a tumultuous river. The area had been badly hit by a huge earthquake in 2008 which killed over 69,000 people and destroyed homes and infrastructure. After the earthquake, a new expressway linking the area of its epicentre with Chengdu had been built but I followed the quieter old road which went through villages and towns that once must have been prosperous with the trade generated by the road. Now, they looked sad with rows of empty roadside restaurants looking at me through their locked, dirty glass doors. I thought about the months of dust and noise the villagers had to endure during the construction of the expressway after having suffered the horrors of the earthquake and whether they were aware that they were witnessing their own demise.

I was really happy in the small, traffic-less road when some building works funnelled me into the expressway. Before I realized I was crossing tunnel after tunnel, more than 25 Km in total, with several over 5 Km long. Tunnels are scary on a bike, they are narrower than the road, dark, dusty, with bad road surfaces and they are noisy. The noise is  the scariest part, I could hear the big lorries from a long way away, the loud noise of their engines echoing in the tunnel. Each time I  waited for the sound of their horns as they warned me about their presence. The sound, even though I leaned to expect it, had an instant effect in my body – I would tense up, grab my handlebars really tightly and forget to breathe. After a while, like Pavlov’s dog, my body reacted in that way as soon as I heard them coming and before they sounded their horns.

I was glad to see the end of the tunnels but what I didn’t expect was to see lush tropical vegetation – huge bamboos, enormous creepers with big yellow trumpeted flowers, butterflies the size of birds. In two days I had descended more than 3000 mt into a subtropical world.

My next town before Chengdu was Dujiangyan, famous for its 2000 year old irrigation system. The town has many bridges to cross it’s many water channels. The water runs at high speed and crowds of people sit on the bridges to cool down, taking advantage of the draft created by the water. I walked for hours before sitting in a small restaurant in a side street where I chose the food by the pictures in the dirty menu I was presented with. I didn’t have a clue  what I would be getting, it was beef and soon I felt the tingly feeling in my mouth one gets when the chemicals in the Sichuan peppercorns get to work: a mixture of heat, tingliness and numbness, not unpleasant but really strange.

The following morning I heard music and saw people dressed in white and pink gathering outside the local Confucius Temple, curious I went to see what they were doing. It was one of those magical moments – soft Chinese music, the gentle movements of the Tai Chi practitioners, their delicate hands, the concentration in their faces, the heat, the humidity, the noise of the cicadas in the trees, the backdrop of the temple. It felt I had indeed entered a different world, an ancient one with lots of history and tradition. I was relaxed and at peace and could’ve sat there the whole day listening to the soft music and watching the harmonious Tai Chi movements. 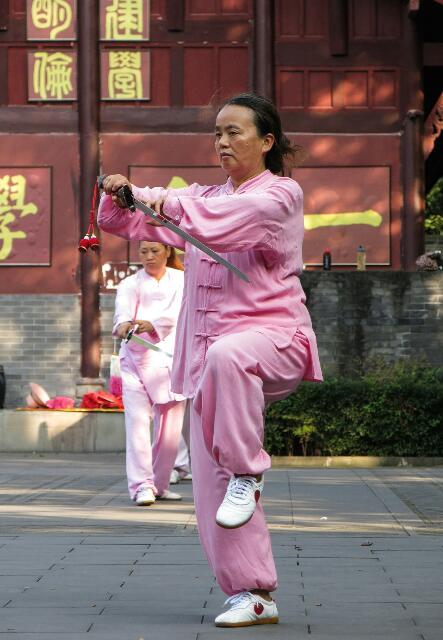 When I arrived at Rae’s house, my Warmshowers host in Chengdu, she was so welcoming, so generous that I felt instantly at home with an old friend. She introduced me to other cyclists that had stopped for a while in the town to fill up their coffers before continuing their journeys. Once more I was part of a small community in which conversation was easy and points of reference shared. It was only then that I realised how much effort I made to communicate on a day to day basis, even for the simplest of things.

I left my beloved Foxtrot with Rae an Tilly (Rae’s bike) to go to Hong Kong to get another Chinese visa. I always find it really hard to be separated from her but it had to be done!

I caught a train to Guilin, I wanted to see the river Li and the rice terraces, the stereotypical images of China. It was a long train journey but I enjoyed the spectacle from the window – the tiny villages surrounded by bamboo and eucalyptus forests, their wooden houses with tiles roofs, the peasants in straw hats collecting tea or carrying loads balanced at each end of a bamboo pole, the wooden boats floating in the rivers, the enormous banana trees, the ripening rice in the paddy fields…

Life inside a train compartment in China is busy with constant comings and goings to the boiling water tap to make tea and cook instant noodles, people glued to their smart phones watching films in their tiny screens,  others clipping their toe nails whilst children run around and make demands of the adults as the ‘little emperors’ the one child policy has made them into. All the while, the trolleys keep going up and down the train selling their fares which changed depending of the time of the day – rice soup and dumplings in the morning, hot meals at lunch and dinner time and fruit and snacks throughout the day. You can buy anything in the train, including toys and power banks!

Guilin was a lovely city built around the most dramatic limestone karst hills with two lakes at its heart, spectacular pagodas lit up at night representing the sun and the moon and a lively food night market.

I climbed one of the hills in the middle of the town, Old Man Mountain, to get a better view of the city. It was really hot and humid and on my way down I stripped to my underwear and joined the locals for a swim in one of the lakes. Being in the water made me think  of my friend Kath and how much she would have enjoyed this. At that moment I had an overwhelming desire to have a companion to share all these experiences with. It’s wasn’t that I felt lonely but…

Guilin was a base to explore the ancient town of Daxu, over 2000 years old and founded during the Qing dynasty, Daxu was a commercial hub due to it’s proximity to the river Li. Very little is left of those busy days, old Daxu was quiet on the rainy day, no tourists and only a few locals going about their daily lives.

Guilin was also the base from where to go to the river Li. I loved being an ordinary tourist for a couple of days. I even took an organised tour to the Longdi rice terraces!!!!

One more train and a ferry and I made it to Hong Kong. Arriving there was a bit of a culture shock, neon lights, people, shops, Marks and Spencer!!!! Friends, old and new, all from the 4 Deserts family, rallied around to help me. Four different families gave me a roof over my head, treated me to fish and chips, cheesecake,  curry and dim sum. With them I went to walks in the Peak and a Moon Festival party in a Hong Kong rooftop. With Free to Run I went for a hike with refugees around one of Hong Kong reservoirs and was able to see first hand the amazing work they do. I loved staying with them all and they made a stressful time waiting for my visa bearable.

After 10 days in Hong Kong I got my visa and I was thrilled. That very day, after saying goodbye to my friends, I took a flight to Chengdu, got back to Rae’s and got reunited with Foxtrot again.

Part two of my Chinese journey could commence.