I’ve been in Romania for nearly two weeks now. It was a bit mad going North when the weather is getting wintery.  My sensible side was telling me to go South before it gets too cold but I doggedly refuse to listen to it.

I wanted  to see  the Danube Delta. Having seen the river  being born in the Black Forest and followed its course through several countries,  I wanted to get to where it meets the Black Sea.

But there was more to Romania for me.  There is the language too.  I was told that it is accessible to Spanish speakers and I was looking forward to being able to talk to people I meet along the way.  One of the things I’ve found the hardest is my inability  to communicate properly. I use sign language in shops,  markets and cafes and when asking for directions and that is OK,  but I miss having proper conversations. More and more I’m coming to realise that this inability to communicate will be the most challenging part of my trip. 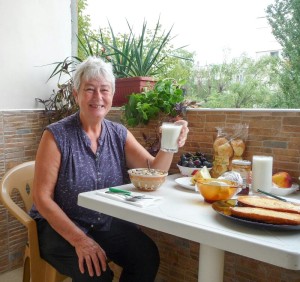 Meeting my friend Carol,  staying with some pretty special people and arriving in the Black Sea have been the highlights of Bulgaria.

Carol came over to Plovdiv,  the second biggest cit in Bulgaria.  We chose it because it was in the right place and 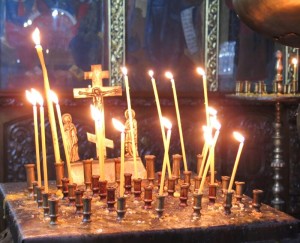 we just liked the sound of its name. We spent a lovely   week together exploring the old town,  visiting Monasteries in the nearby mountains,  going to the Opera in the old Roman theater,  ambling in gardens,  drinking coffee in small cafés,  having leisurely breakfast in  the balcony of our apartment and talking,  talking.

Bulgaria has been the country in which I’ve ventured into Couchsurfing.  What a discovery! I have met the most generous,  kind people  who bought echinacea for me when they saw I had a terrible chesty cold,  cooked a  delicious BBQ and showed me some amazing sites.

My favourite site was this incredible concrete communist monument in Varna at the top of a hill.  The entrance was bricked in but someone had knocked some of the bricks off. Tienne,  my couchsurfing host and I, armed with torches climbed in. The inside was a maze of stairs, rooms and corridors,  some covered with graffiti . Nothing was  at a straight angle,  Here and there were openings to the outside letting in the grey light of the day. At some point we discovered we weren’t alone  as smoke  started to come up from the basement rooms.  We decided it was better to leave before we had an unwelcomed encounter.

I’ve had a great time in Bulgaria and I’ll be back when on my way to Greece once I’ve explored a bit more of Romania.

7 thoughts on “From Bulgaria to Romania”